Why I hate Walmart 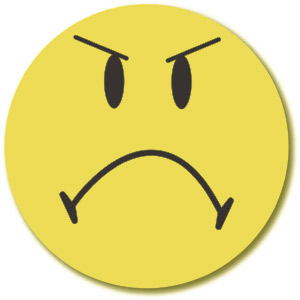 I’m going to go on record saying that I was extremely sleep deprived this afternoon. And aliens took over my body at some point which is why I decided to go to Walmart to pick up 7 items. Standing in line, with 54 people behind me and two people in front of me, after reading People Magazine, US Magazine and the National Enquirer it occurred to me that the cashier had the IQ of a squid.

The guy right in front of me only had 7 items as well, but the woman actually being checked out had about 432 items and “Rosie” the cashier had a comment for just about every one of them. When she finally rang up the last box of tissue, everyone breathed a sigh of relief. That is, until the shopper pulled out a 1/2″ thick wad of coupons.

Just about every other coupon had a problem. Several had to be manually entered, using the extremely tiny printed numbers that Rosie peered at through her coke bottle glasses. The store manager was called over twice to make a call on whether a coupon could be used. I kept wanting to bail, but at that point I had so much time invested, I wasn’t sure I could start all over again. Plus I had already read all the gossip magazines. So I just got more and more annoyed.

We were down to the last 2 coupons totaling $1.75. Naturally, the machine kicked back both as invalid. The woman is arguing that she did too purchase the items but she’s not going to go through all those piles of bags to find them. So Rosie decides to be on the safe side by scrolling back the tape register to look through the 432 items with her coke bottle glasses to find the missing products.

That’s when I snapped. Pushing past the guy waiting in front of me I slapped down a $5 bill and yelled, “I’ll buy the coupons.” I snatched the coupons off the counter and turned to the woman – “keep the change.” Then I turned to Rosie, “Just ring her out,” I hissed.

“I don’t think you can do that,” said Rosie.

“Oh yes she can,” said the guy behind me. And then he started clapping, along with several other people in the line. I turned to the guy in front of me. “Don’t even THINK about pulling out a coupon,” I said through gritted teeth.

“Not a chance,” he said, staring at me with his hands held up.

When Rosie got to me she checked me out without a single word. And when I left she did NOT tell me to have a nice day.