On November 17, 2008 at 5:36 pm my son’s father died. His name was James Carroll Payne but everyone called him Jimmy. He was 52 years old. I didn’t talk about him a lot, and when I did I seldom used his name. I always referred to him as “Gary’s Dad.” Jimmy and I didn’t have any type of relationship and our past was full of violence. That’s because Jimmy was an alcoholic. When he was drunk he was mean as a snake. Meaner than anything you ever could imagine. And he was drunk pretty much all of the time and mad at me for most of it. In fact, he had a fifth of vodka in him when he fell and hit his head, causing the concussion that ultimately led to his death.

Given our violent history, you’d think I’d be relieved.    Or at least calm and accepting. Like when you read in the newspaper about the death of someone you knew in passing and you feel a slight “oh, that is too bad” sort of feeling and then go on with your day. Instead I was surprised to find myself overcome with a sense of loss, grief and remorse. I’m trying to understand why I am so sad. And I’ve come to realize it is because he was the love of my youth. Before alcohol stole his soul and drugs took the rest of him, he was mine. He was tall and strong and dark and handsome. He was the only man in my life to chase me around a park until he caught me and we rolled around in the grass until we lost our breath. He was the first man to ever take me to a patch of wild blackberries and teach me how to pluck the ripest ones. Years later, his son would take me to a pancake breakfast at the local fire department for Mother’s day. And afterward take me to a patch of wild blackberries for dessert. And they never tasted so sweet and so ripe as the memories of that day with Jimmy in the meadow, with our lips stained blue and laughter in the air.

I am so sad to think that at the end of his days because of the alcohol, people who knew him would only know this angry shell of a man. They would never get a chance to know or understand the man who once recited poetry to me. Poems he’d written. The man who stayed up half the night to boil eggs and color them with magic markers so I would have a surprise Easter basket the next morning. The man who was so excited and desperately in love with his new infant son that he carried him around for days on end, only reluctantly turning him over to me to nurse at feeding time. 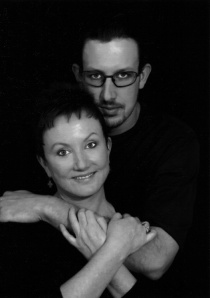 And no matter how mean he got, children and babies loved him and he adored them in return. Infants lay in his huge hands as if cradled by God. I watched many a baby, including my son Gary, lay and stare into Jimmy’s eyes as if they trusted the entire world to him. If they couldn’t walk, they rolled on the floor until they could be near him. If they crawled they found their way to his chair. And if they did walk, they followed him around like puppies. Until they were old enough to understand what alcoholism meant, my stepsons thought Jimmy was one of the neatest people they ever met. And Gary loved his father passionately even when he hated him, until the very end.

It was my son who signed the “Do Not Resuscitate” papers and the authorization to take Jimmy off the respirator. It was the final step in a long journey home. Gary was with his father when he died, ten minutes after going off all machinery. I don’t know if there is an official moment when you realize you are finally grown up. But I would say that was Gary’s.

Later in the evening my son and I sat in front of the fire holding hands and talking about his dad. How gifted Jimmy was as a mechanic. How funny he could be when he was sober, and how smart he was. It was a good talk and it made me feel a little quieter inside. Jimmy’s entire adult life was one big river of alcohol. It would be easy to think about all the wasted opportunity. But when I looked at Gary that night I realized he got the best his father had to offer. He is tall and strong and dark and handsome. He is smart and funny. He is so gifted as a mechanic that he is legendary. And he knows where to find all the best wild blackberry patches.

So I wrote this to honor the good memories of James Carroll Payne and to thank him for the legacy he left behind. A legacy that wraps me safely in strong arms and huge calloused hands and simply says, “I love you, Mom.”